Dream Big Work Hard. Those four simple words have helped to transform Pewaukee native JJ Watt from small-town Wisconsin boy to being selected #11 Overall Pick in the 2011 NFL Draft by the Houston Texans and the 2012, 2014, & 2015 NFL Defensive Player of the Year. The journey from backyard football to the big stage of the NFL was not always smooth, never easy and filled with adversity, but with unbelievable support from his friends and family, JJ turned his childhood dreams into reality.

Born to John and Connie Watt in Pewaukee, WI, on March 22, 1989, at 9 pounds, 14 ounces and 22 inches long, Justin James Watt, or JJ, was destined to do BIG things. JJ’s middle name honors his paternal grandfather, James, who became a major role model and mentor in JJ’s life. He learned the significance of legacy and service at an early age. JJ and his younger brothers attended Pewaukee High School like their dad, broke their dad’s track and field records, and further went on to become Wisconsin Badgers.

This legacy, along with his grandfather’s military service, his father’s work as a fireman, and the volunteering he and his brothers did starting young by raking leaves and shoveling snow for neighbors, taught JJ that hard work, dedication and service is part of everyday life. JJ has always been grateful for the opportunities he’s been given, and works hard each day to show his appreciation for these gifts.

While JJ’s first love was hockey, which he started playing at the age of 3, he would eventually declare his desire to become a football player. When he was 7, he announced to a local newspaper that wanted “to be a great player, like Reggie White.” Shortly thereafter, JJ would set one of his first goals for football -to play for the Badgers at the University of Wisconsin-Madison. As he started to share his dream with others, many adults doubted his abilities.

“I’ve had many adults in my life tell me that my dreams are too big. My dreams were unrealistic.” – JJ Watt

With the help of his 5th grade teacher Mrs. Keefe, JJ never let the doubts of others stop him. From the age of 5, JJ and his two younger brothers, Derek and T.J., were given life-forming, words of wisdom from their dad every day before leaving for school. The phrase was powerful in its simplicity – act like somebody. The Watt family mantra was much bigger than football. Act like somebody was about creating a mindset that with every day, with every action, you tell the world something about yourself. It’s a reminder to ensure that you’re staying positive, being respectful, acting as a leader, and carving out your own destiny rather than being a follower.

The ritual saying created a bond between the three bothers that meant more than words. It’s a connection that runs deeper than football and the University of Wisconsin and roots itself in their family – a way of life. The brothers rely on each other for help and support, which is why, in honor of this significant bond, each of them has the Chinese symbol for family tattooed over their upper left chest with the initials J (Justin), D (Derek), and T (Trent). 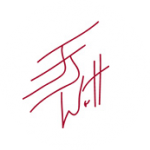 “I hope to make you proud of me on the field as well as off the field by helping the kids in the community have the same opportunities that were afforded to me. That is only possible with the support of people like you and for that I’d like to say thank you! I would not have received such success if it were not for the support of athletics… this is the intent of my organization…”